The venue for the Red Bank BBQ festival was great. A RV park with plenty of power and water hook ups.

Friday night we entered the sausage category.  We made a sausage casserole and garnished with strawberries and blueberries.

A sample from the main meat categories.

We took 15th overall out of 39. Respectable but we have a long ways to go.

We have been updating some equipment and refining our cooking process for the 2016 BBQ competition season.  Our first competition this year will be at the Fire in the Valley Red Bank BBQ www.redbankbbq.com

I don’t think there is a prettier setting for a BBQ festival than Maggie Valley, NC!  Surrounded by mountains, Maggie Valley is just a naturally beautiful location. The fairgrounds in the valley by contrast is flat and well laid out.

We came into North Carolina for the competition with the rain. Driving through the mountains with a 30′ BBQ trailer in the rain is a little hairy, but we made it ok.

We had a pretty good location for the competition. The weather turned out to be pretty good – cool at night with just a stray shower or two over the weekend.  It was a nice heat relief from the July heat we are experiencing at home.

Butch found the weekends entertainment – watching the mountain goats on the hill behind the fairgrounds. The were just where we could see them coming and going most of the day. The entertainment came from the stories made up about the goats – everybody had some kind of story about why those goats were up there.

So the weekend was good up till the awards.  Our scores were at the bottom of the competition.  Not what we expected at all.  We thought we turned in some good meats, but obviously the judges did not agree. 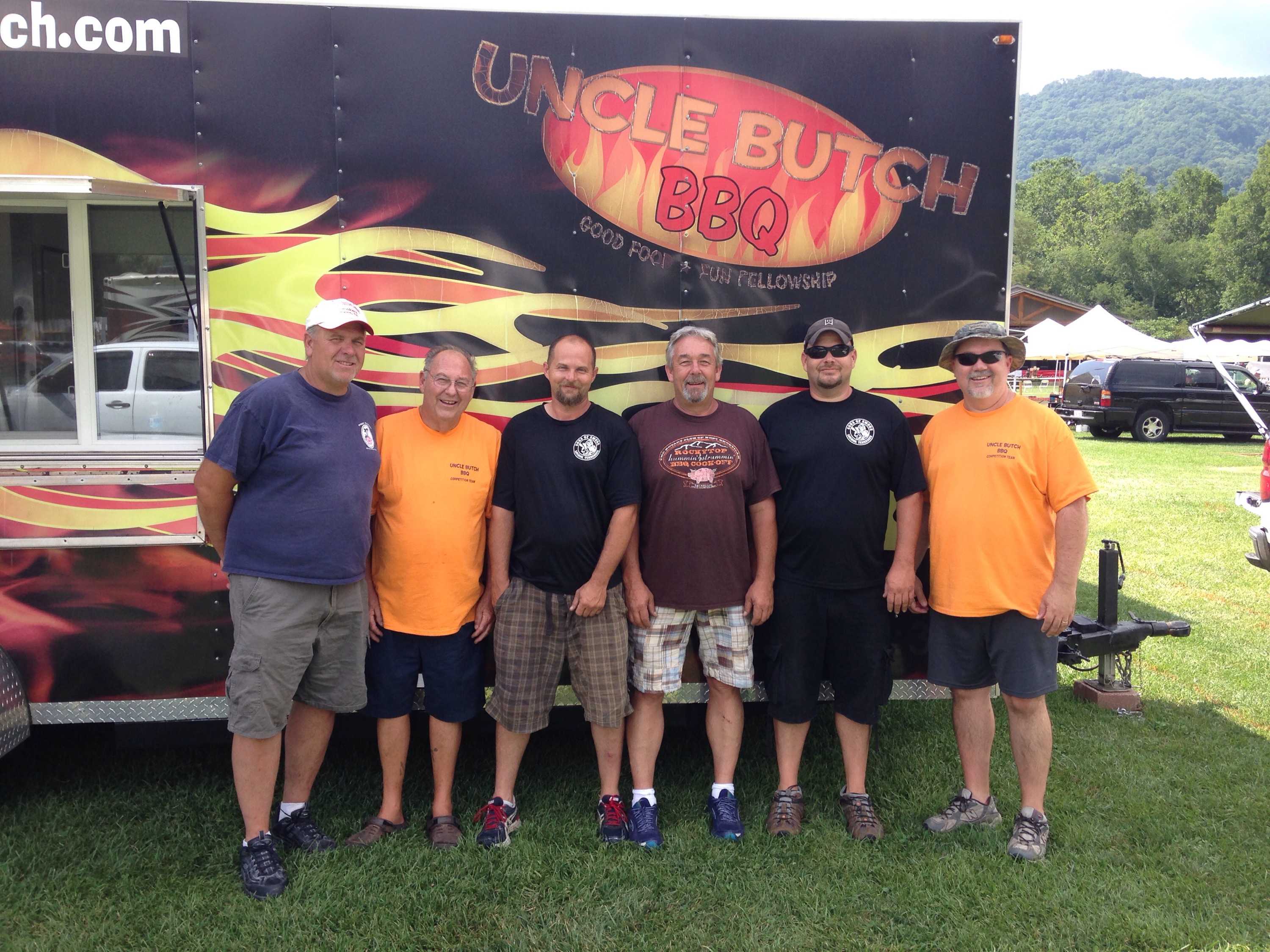 Our site at the Maggie Valley fairgrounds 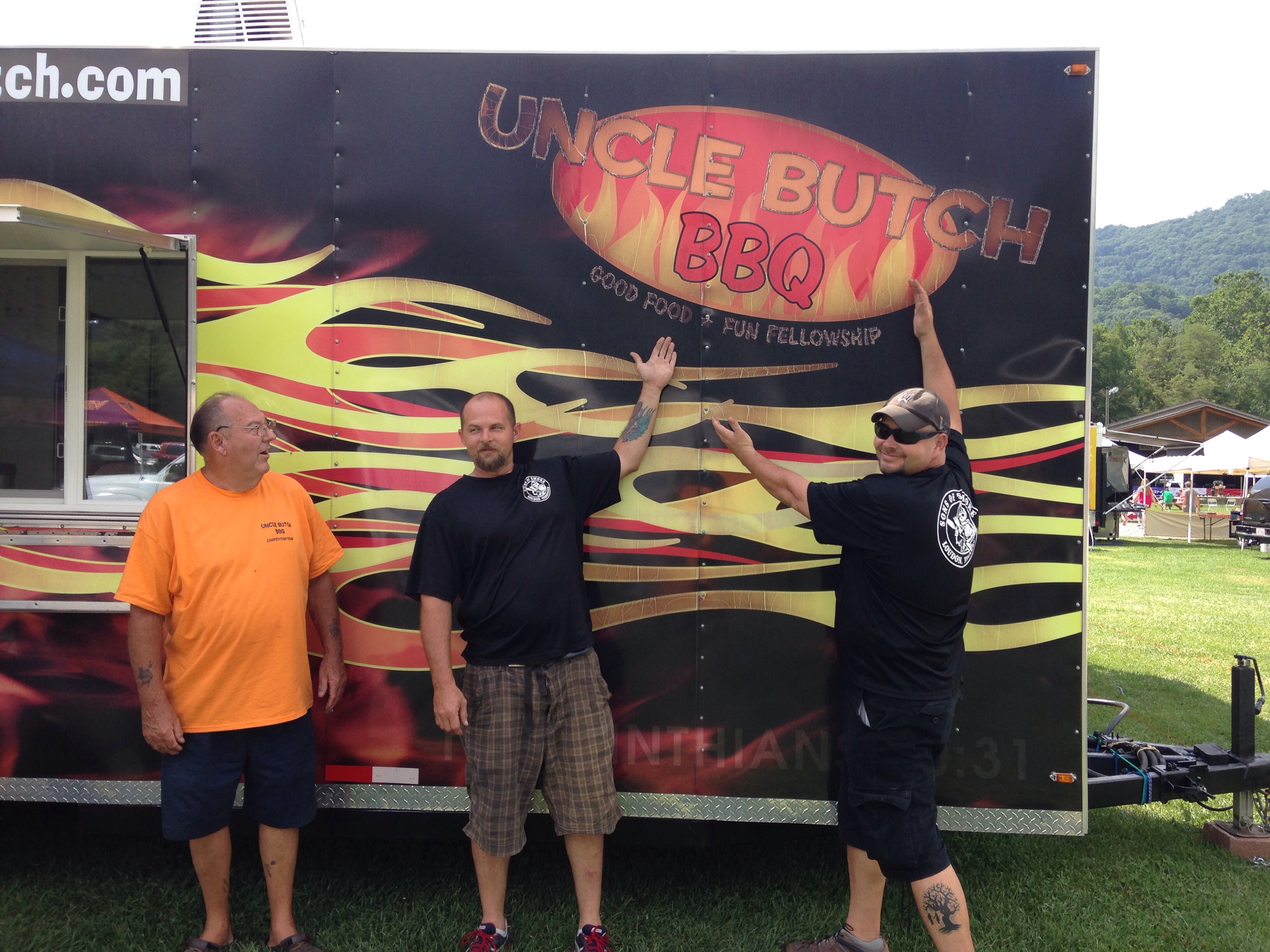 Sons of Smoke give Uncle Butch a lot of credit 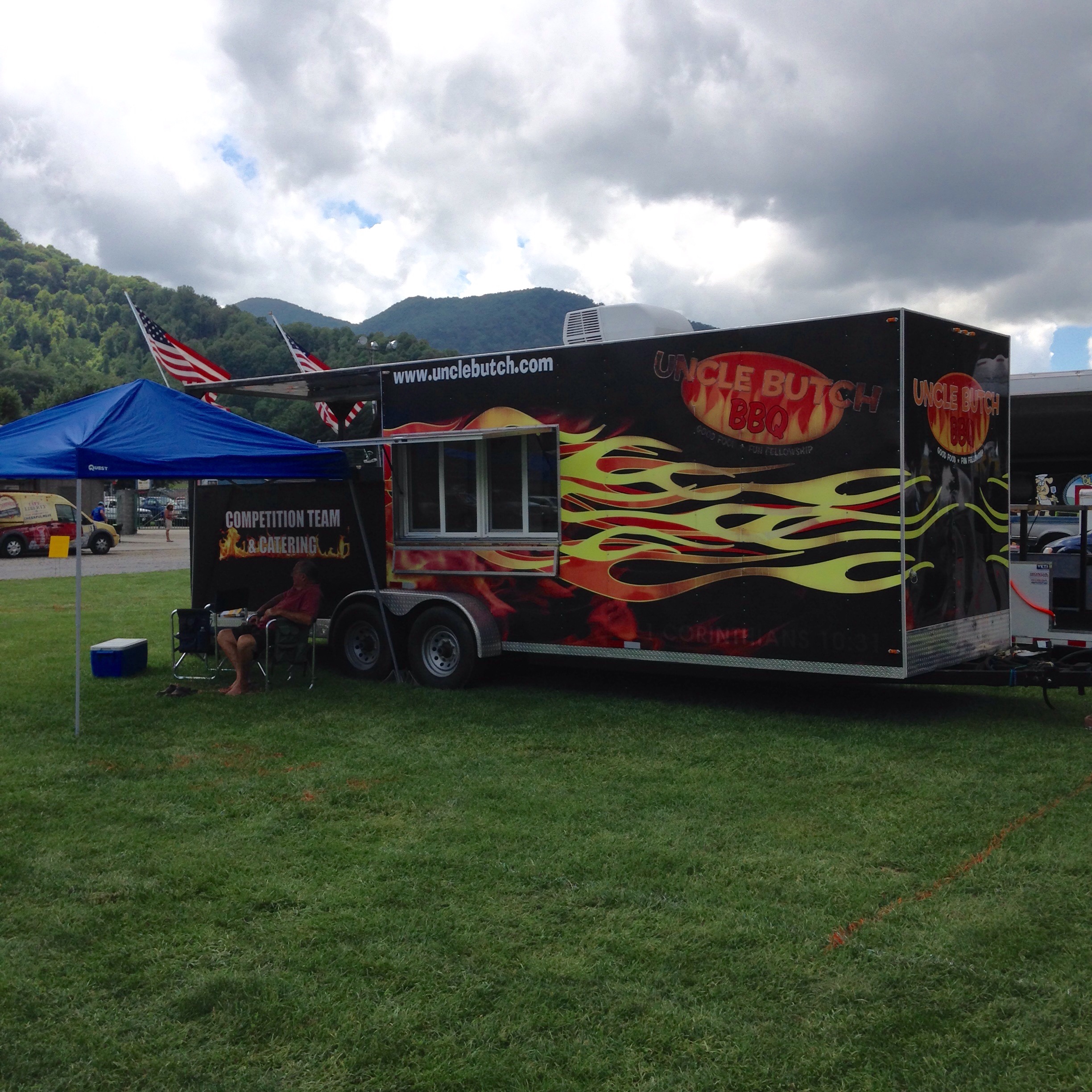 Our competition site – ready for business and fellowship 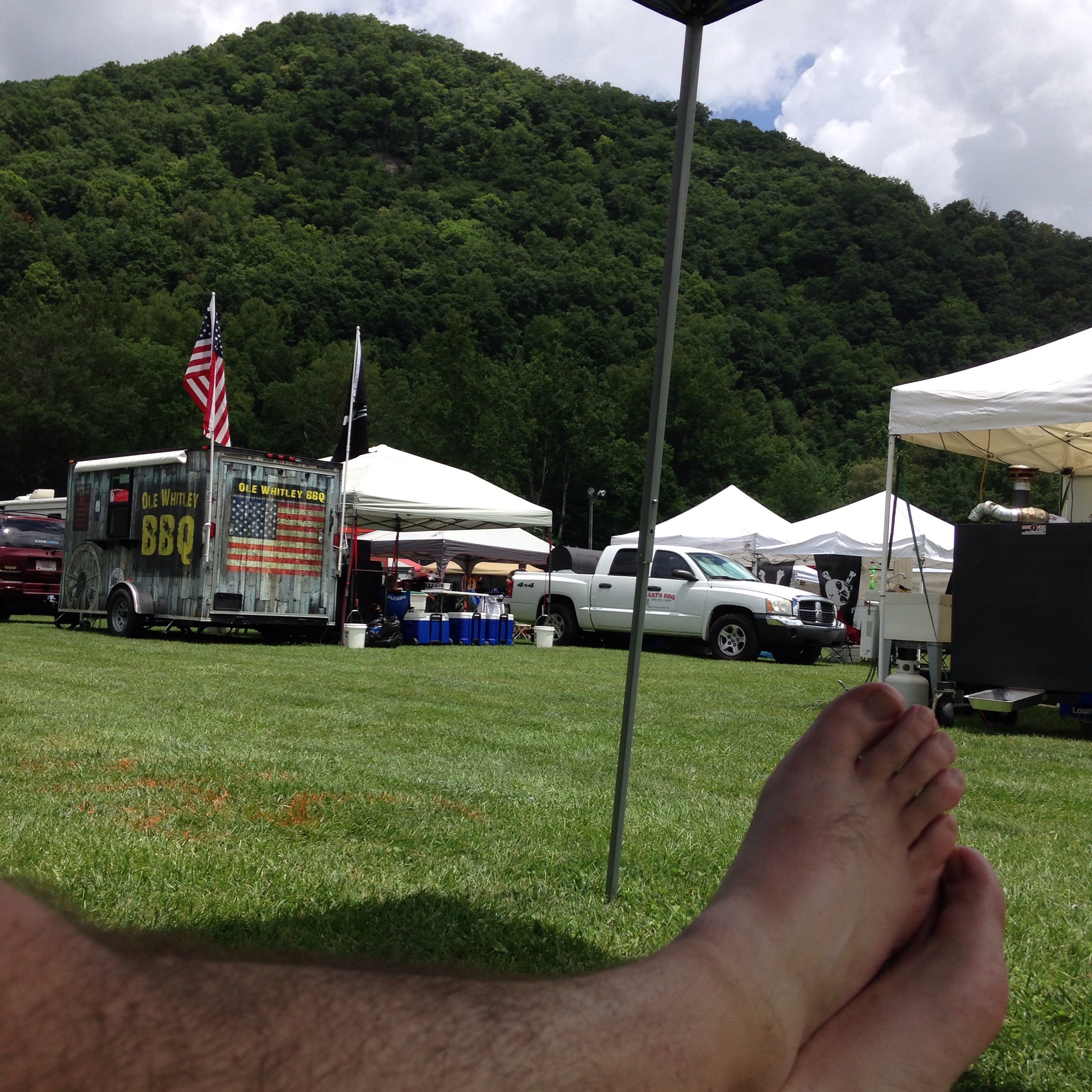 Resting up on Friday before the smoke started rolling 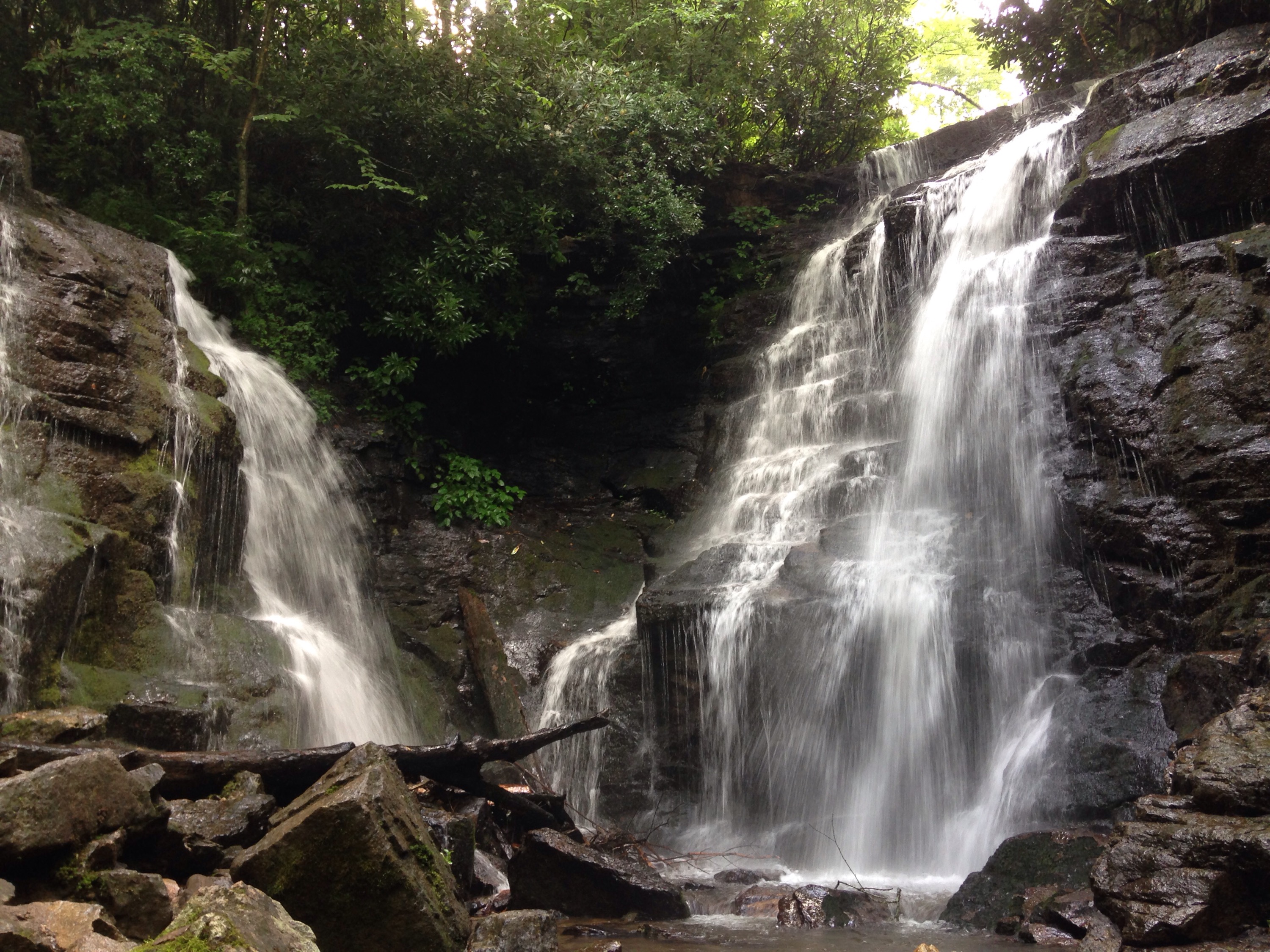 Soco Falls – not far away from Maggie Valley

This weekend was the Big BBQ Bash in Maryville, TN. The event is right downtown and draws a good crowd.  This year the rain was on more than it was off, but with our newly designed BBQ trailer we were able to handle it a lot better than we used to.

The last competition in Knoxville we did just outstandingly great.  So expectations by us and others were sort of high.  Well, hate to disappoint, but we didn’t fare so well.  We felt our meats were really well, but the judges saw completely different.

So from a scoring stand point it was was not a good weekend, but we had a good time cooking and fellowshipping with our BBQ friends. 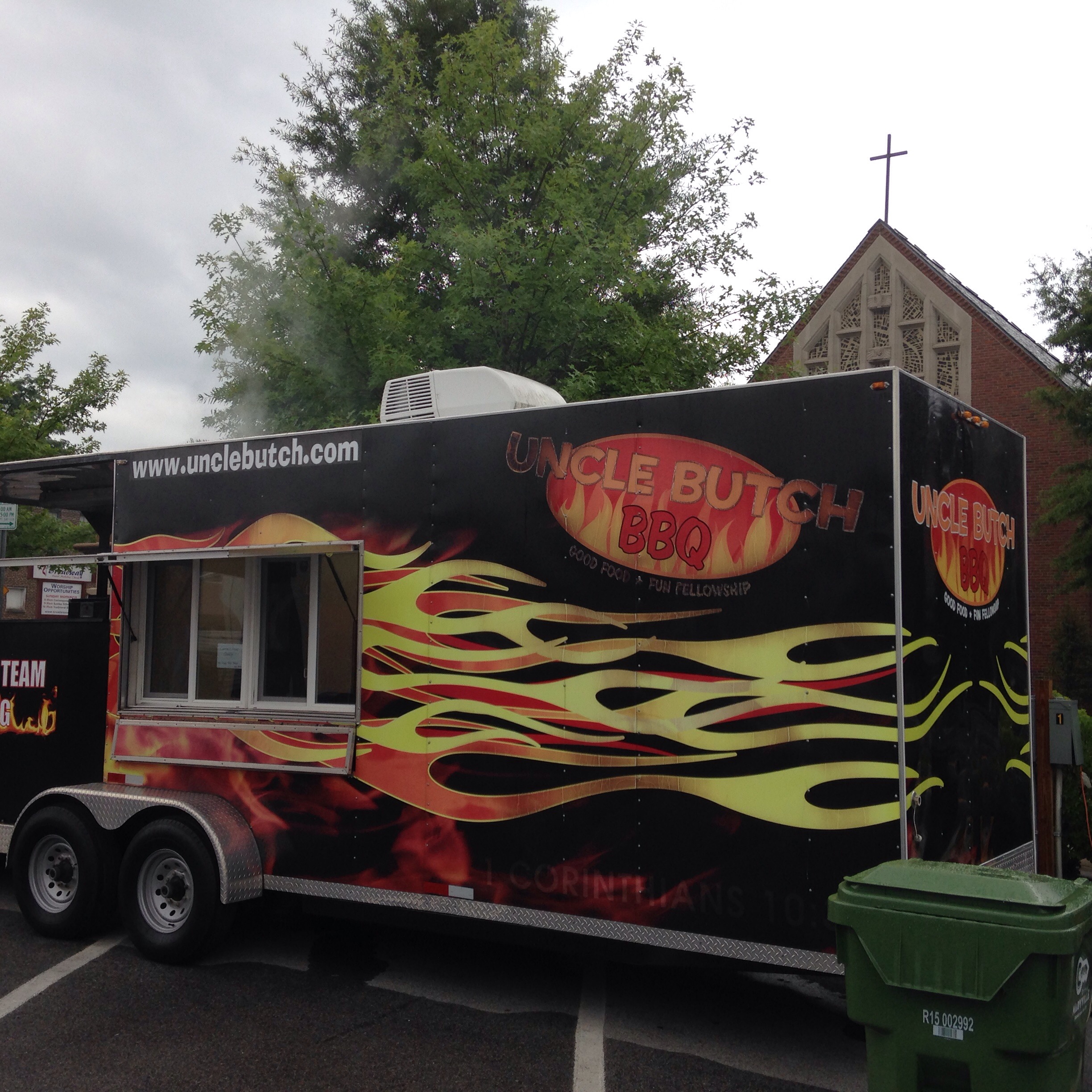 In the shadow of Broadway United Methodist Church 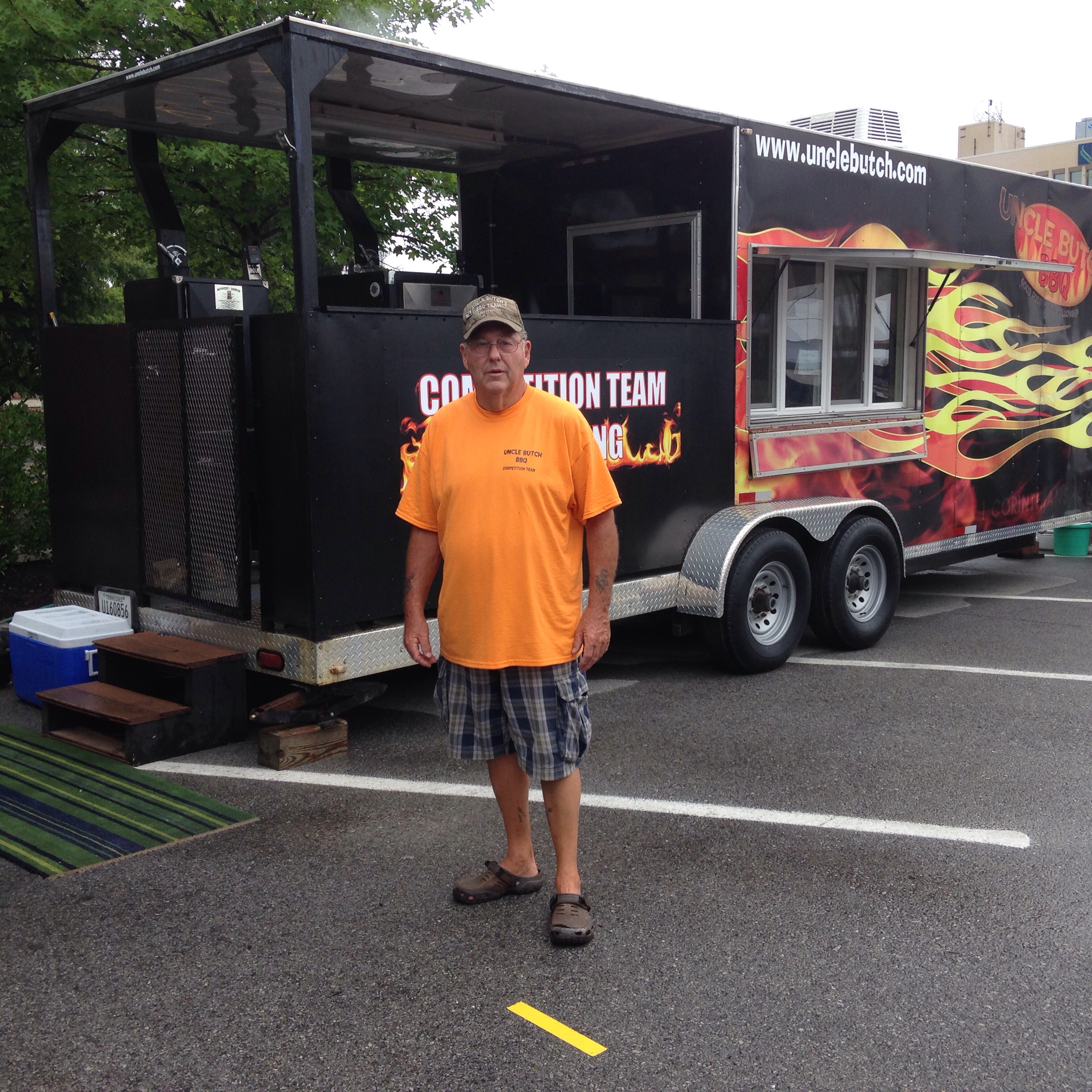 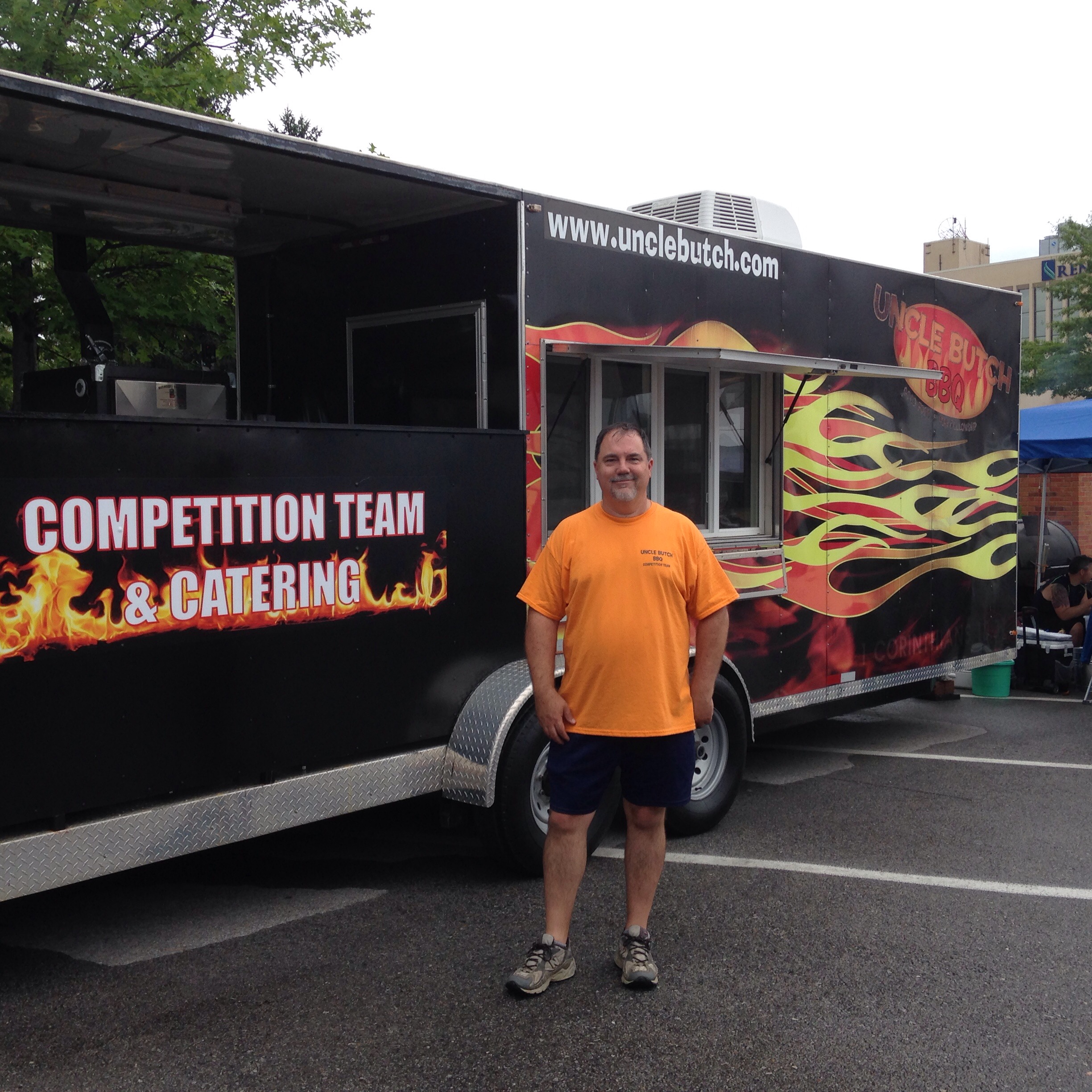 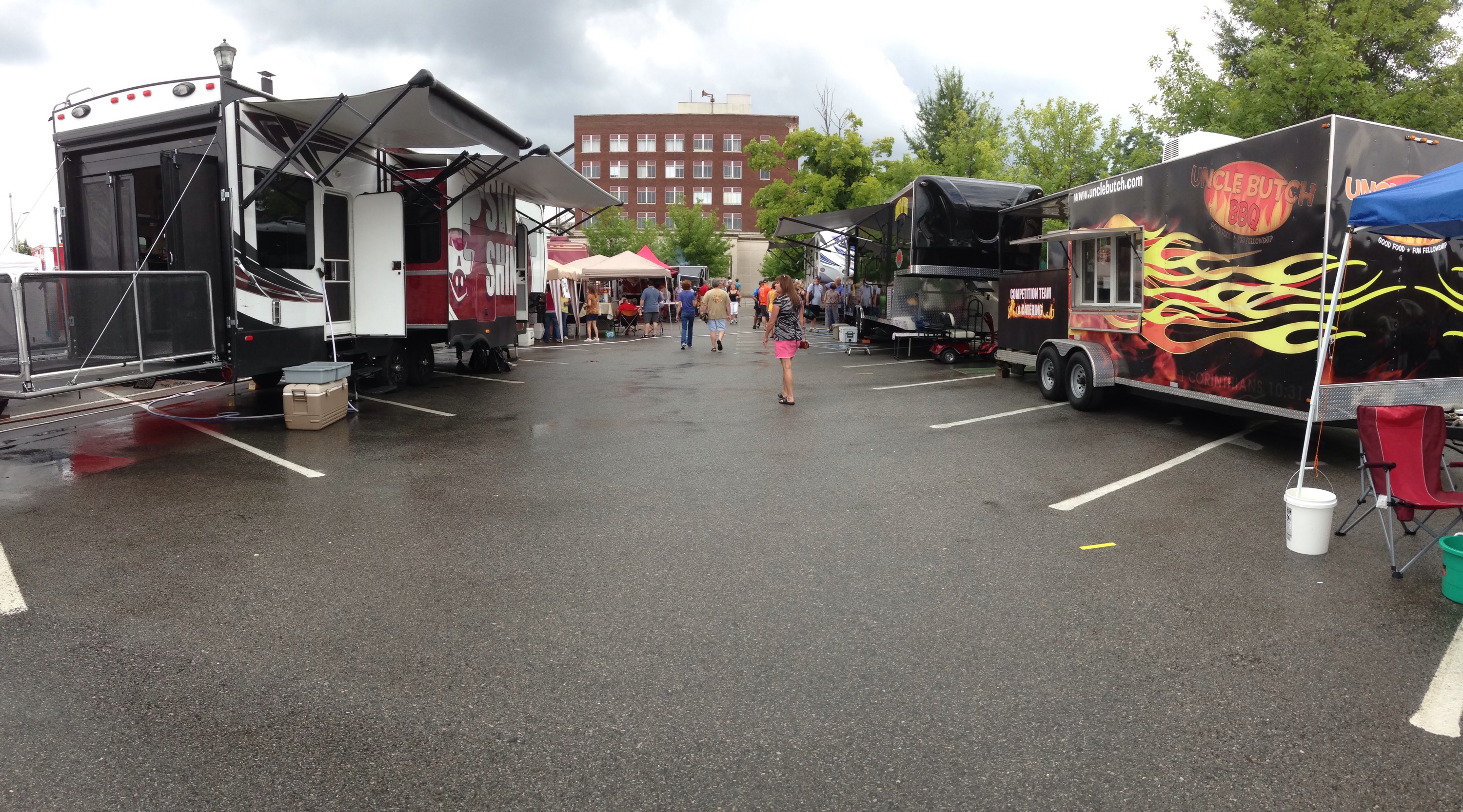 Our neighbors for the rainy weekend 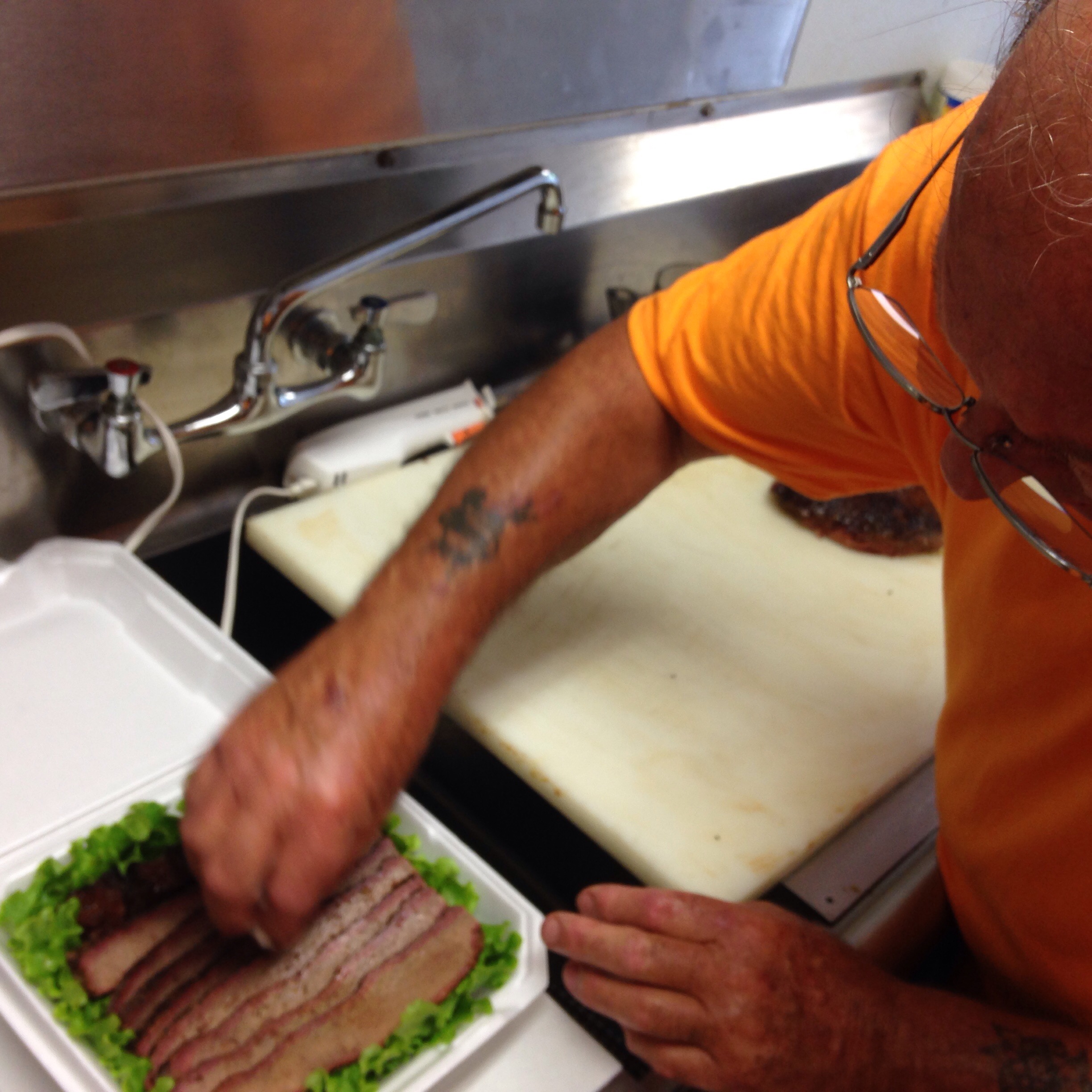 Uncle Butch putting the final touches on our brisket turn in box.

Prepping a little sausage and bacon for the sausage category

Our first BBQ competition of 2015 was the Rocky Top BBQ Fest in downtown Knoxville at the World’s Fair site.  We were in competition with 40 teams from all over the South.

Just as the cooks meeting started on Friday evening the rain started to just pour.  Now we needed the rain for sure, but the timing was not the best.  We got a few things soggy, but nothing to slow us down.

The Rocky Top BBQ Fest is a fund raiser for the Rotary Club of Bearden, and it was held for the first time at the World’s Fair site in downtown Knoxville.  The location is just great and the facilities were just as ordered!

This was our first competition of 2015, and the first on our new smokers.  We had practiced a few times, but never really brought it all together till the competition.  We were a little hesitant in controlling our temperature, but in the end we made it through ok.

We have got to know several great people through competition BBQ.  Most of em are just like us – every day working people trying to be the best at cooking BBQ meat.  I appreciate the hard work, time and money that goes into a competition.  We have a good relationship with some pretty good folks, and really enjoy the social part of the competitions. 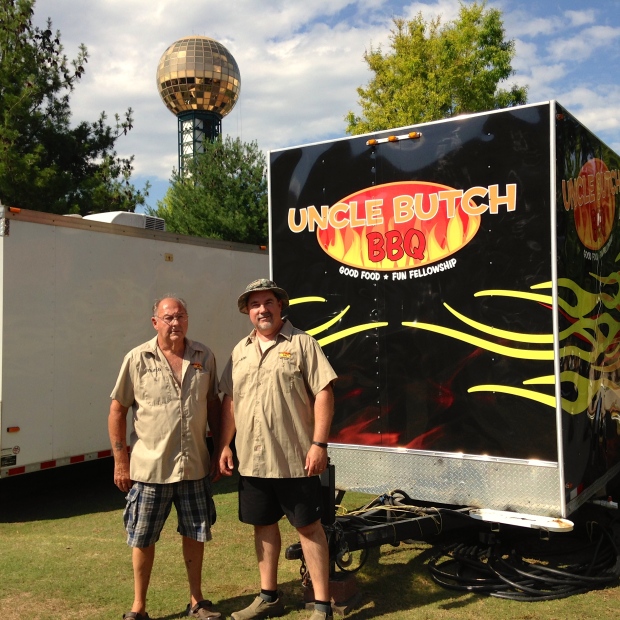 Chicken is the first meat to turn in.  Dad thought that is just was not quite done when we turned it in.  I thought it looked ok, but we were just not settled with it.

Ribs was second, and we thought we had some good slabs of ribs.  The cooked well and had a good color about them.  Taste wise I thought they were pretty good.

Pork is third, and we have been experimenting with a new way to slice and turn in meat.  At least it is new to us.  It was hard to cut what we needed to because it was just too tender (actually over done a bit I think).  But the taste was good so we moved on.

Brisket is the last turn in.  We tried brisket from a new vendor, and were just not happy with it.  It tasted good, but was a little dry I thought.

When it came awards time we had absolutely no idea if anything would be good according to the judges.  We bought our new smokers from Jackie Price, and he said we would see a 20% in our scores by using the new smokers compared to the wood burner we have been using.  Well – Jackie was right!

We took 1st place in Chicken!  Honestly we both said it would be our worse turn in because we didn’t think it was done, but we were wrong!  What a great feeling to get that trophy.  We had never won a category at a KCBS event, so this was a surprise and treat!  We were just blown away.

In Ribs we took 7th place.  First time placing with ribs, so we were really happy with the results.

The other two meats placed just outside the top 10.

Then came the overall for the competition – we placed 4th!!!  We could not believe it!  Never been in the top 10 before, so we were just beside ourselves.  And to top it off, we were one of 4 teams that scored a 700 for the competition!  Scoring 700 is an accomplishment within itself, and a rare thing in KCBS competitions.  In some competitions the winner might score 700, but to have 4 teams with 700+ score was just something else!

We certainly have been blessed at Uncle Butch BBQ!  A way has been made to upgrade and redesign our BBQ trailer.  It is now built first for competition and then for catering.  Both are important for Uncle Butch BBQ, and both are still going strong!

Check out the pictures below that show the updated smokers, interior and exterior design along with a little new signage.  We are excited for what this new design and equipment will do for our BBQ competitions and catering!

Well the 2014 competition BBQ season has come to a close.  We had a great year participating!  A 4th place finish in Pork was our best results.  A bit disheartening, but we know we don’t compete enough to get much better at the craft.

We did make some new friends this year which is a great bonus to us!  We enjoy cooking together as team, but also enjoy the folks we meet.  Competitors for sure, but also friends who will help if you get in a pinch.  BBQ teams are funny, fickle and friendly – I guess that is why we fit in so well! 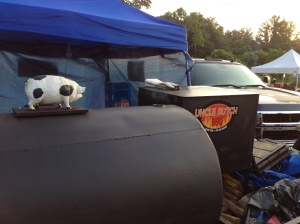 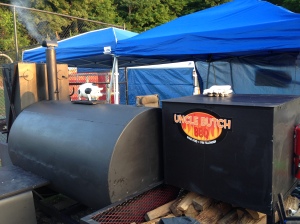 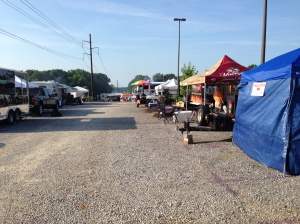 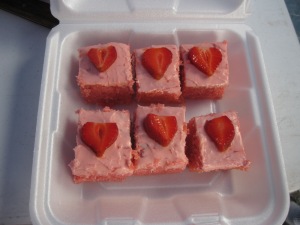 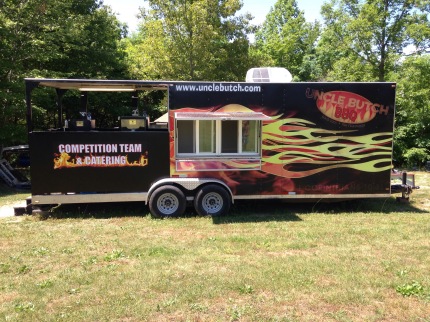 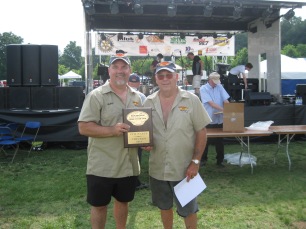 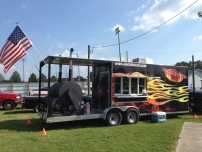 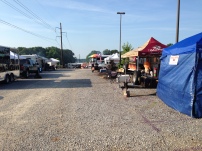